What It Takes to be Number One 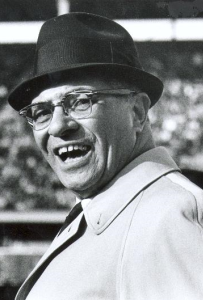 WHAT IT TAKES TO BE NUMBER ONE
“Winning is not a sometime thing; it’s an all the time thing. You don’t win once in a while; you don’t do things right once in a while; you do them right all the time. Winning is a habit. Unfortunately, so is losing.
There is no room for second place. There is only one place in my game, and that’s first place. I have finished second twice in my time at Green Bay, and I don’t ever want to finish second again. There is a second place bowl game, but it is a game for losers played by losers. It is and always has been an American zeal to be first in anything we do, and to win, and to win.
Every time a football player goes to ply his trade he’s got to play from the ground up – from the soles of his feet right up to his head. Every inch of him has to play. Some guys play with their head. That’s O.K. You’ve got to be smart to be number one in any business. But more importantly, you’ve got to play with your heart, with every fiber of your body. If you’re lucky enough to find a guy with a lot of head and a lot of heart, he’s never going to come off the field second.
Running a football team is no different than running any other kind of organization – an army, a political party or a business. The principles are the same. The object is to win – to beat the other guy. Maybe that sounds hard or cruel. I don’t think it is.
It is a reality of life that men are competitive and the most competitive games draw the most competitive men. That’s why they are there – to compete. To know the rules and objectives when they get in the game. The object is to win fairly, squarely, by the rules – but to win.
And in truth, I’ve never known a man worth his salt who in the long run, deep down in his heart, didn’t appreciate the grind, the discipline. There is something in good men that really yearns for discipline and the harsh reality of head to head combat.
I don’t say these things because I believe in the “brute” nature of man or that men must be brutalized to be combative. I believe in God, and I believe in human decency. But I firmly believe that any man’s finest hour – his greatest fulfillment to all he holds dear – is that moment when he has to work his heart out in a good cause and he’s exhausted on the field of battle – victorious.” - Vince Lombardi
~Lou Sandoval is an entrepreneur whose successful career transcends over 17 years of Fortune 100 experience parlayed into business ownership. Lou believes in giving back to his community and has been involved in the Boy Scouts of America's leadership. He serves on a few non-profit and professional boards. Opinions expressed here are solely personal and not a representation of any of the organizations with which he may be affiliated.
Email Post
Labels: leadership Motivation Vince Lombardi