The "call" came at 805am. "He's in ICU and might not make it." said the voice.  "How , why- what happened?" "He was with his friends and a rival gang opened fire on them- shot him five times- very serious"

As someone who has an extended family member in one of the local trauma centers recovering from being shot over the last two weeks in the city violence, I can say with clear conscience that it is not the guns that did it rather his failed lifestyle and upbringing.   HE chose a life of Gangs. You can say that we (his family ) collectively failed him.  While I've known him for only half of his short life on this planet- many who knew him before that - some of the same who now lament at the ICU at his state of being- scratch their heads at how he got there. In their heart of hearts THEY know.  The gang life is path in life that finishes in one of two endings- dead or in jail.

He got a second chance- (I'd argue a third chance) - if he doesn't see it , he'll result as one of these bylines in the local rag and a red blood stain on the pavement.  It won't have been the gun that caused his demise - it will have been the path he chose.  I close this with a prayer that he is able to see how his life could have ended.  The hope is that he will alter the course of his path so that we don't end up at this juncture again-possibly with a more fatal outcome.

In the summer of 2013- It is a summer of violence. Regardless of how much regulation politicians try to instill- the outcome is fairly predictable.  Address the issue of broken families and declining family values and this story will continue to be told- again and again.

This edition- came very close to home.
Posted by Lou Sandoval at 5:00 AM No comments:

How to be the best attribute to your daughter. 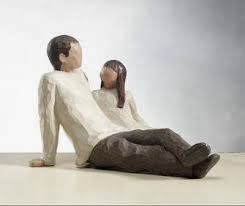 Like many parents I am no expert in parenting.  There is no manual that comes with the title: "Dad". With Father's Day coming up- I did some reflecting recently on what it means to be a dad.   I have been fortunate in receiving the blessing of having a great dad and good role model.  I've taken the things I saw my dad do well for us and have tried hard to improve upon them with my own daughters.  Sometimes with good outcomes, other times- not so much.

We have heard the cliche's:  " Any male can father a child, it takes a real man to be a father" or "The difference between a biological parent and a father is the time you commit".  There are many others I am sure.  I like the later because it strikes at the core of some of the problems I see at all ends of the economic spectrum-Time.    In poor communities, either for lack of education, finances (perhaps a need to provide) and other reasons- there may not be the time put into properly mentoring young boys or girls.  There are alot of programs for at-risk youth-but have you ever noticed that in spite of this - at-risk youth still exist?   In wealthier communities, money is showered on children, perhaps to make up for the self-absorption of their parents and because the means exist.  You still see the same degree of dysfunction- its just that mom and dad's money might be able to correct any issues that come up.   At both ends- money is thrown at the problem either through government funded programs or the wealthy parents.  Neither hits the mark as the main thing is attention , love and caring.  You can buy that and you surely can't fund that through a poorly administered program with no accountability.

It's sad that we live in a hyper-sexual world where there seems to be an empowering of one gender at the expense of another.  That seems to be the mantra these days-I win- you lose in everything.  As a parent, I worry about what this is teaching our kids.  You really want to just unplug the 24/7 media and their droning.  Makes you long for the simpler times of black and white TV, getting your news via the paper and kids being kids.   I guess for that to happen, adults need to parent and focus on the main thing.
Posted by Lou Sandoval at 1:14 PM No comments: